We are excited to present to you our most recent recipient of the Palmer Award, Mitchell Tijerina (Denison University). The vision Mitchell created at the Institute centered around developing an interest in the affects of climate change and environmental issues by providing opportunities for people to experience nature first-hand. Through this exposure, he believes people will develop a sense of love and respect for the environment. Mitchell shares that “…a vague passionate idea at the Institute helped me bring into a sharp well-focused vision.”

Mitchell sees that without a personal experience, people are unlikely to cultivate a love for the outdoors or come to truly care about the well-being of it. To combat this barrier and bring exposure to the importance of Earth, Mitchell is creating a documentary film called La Gente de la Tierra.

La Gente de la Tierra focuses on the influence that the natural world has on the art, culture, and spirituality of five indigenous groups across Perú. Through this film, Mitchell hopes that people will discover how our day-to-day lives are intricately connected to the earth.

In preparation for the documentary, Mitchell applied for scholarships, developed a Kickstarter campaign, and assembled a team. He then spent four months living in Lima, Perú. During his time in Lima, Mitchell spent time studying as well as connecting with NGOs and indigenous communities across the country. He then spent two months traveling, filming, conducting interviews, and living with the amazing people in the area.

Through all of this, Mitchell tell us he “mastered the Spanish language, different editing programs, and film equipment through taking classes at La Pontificia Universidad Católica del Perú.” He also invited two other filmmakers from Denison University and Saint Olaf College respectively to join the effort and employed the help of a number of local translators to help with the 6 different languages they worked with. 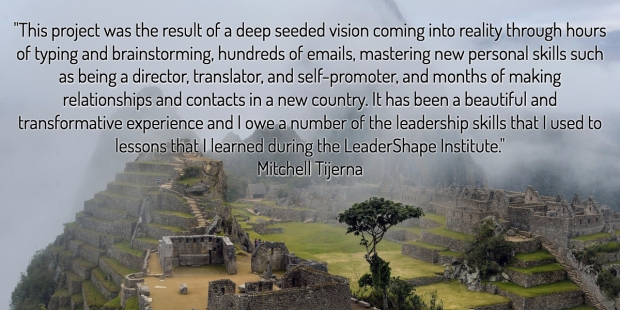 Beyond an awareness of and care for the environment that the documentary hopes to create, Mitchell’s work has also directly contributed to some communities in Perú. He and his team have created a promotional video for Porvenir Perú, an organization that provides greenhouse building supplies to communities that often lack in nutrition due to vegetables being unable to grow at the extremely high altitude. They are also working on promotional videos for the Ayahuasca Foundation, which focuses on medicinal plant knowledge, and Threads of Perú, an organization that promotes and sells artisanal work of indigenous women in the Andes.

While we wait for the documentary to be completed, the trailer and update videos are being shown by science high school teachers in New York. Mitchell is hopeful that they will soon be shown in high schools in Columbus. The final product will be aired this spring at Denison University and at a local community theater in Columbus.

Mitchell shares that, although long and difficult, the journey has been worth it. We have to agree and can’t wait to see the documentary in its totality. Congratulations Mitchell!