February always brings about thoughts of love and at LeaderShape, we’re turning to mush over some sweet love stories from folks in our community! Over the course of this month, we want to tell you about some couples who met through LeaderShape, tell you how they fell in love, and take a peek at what’s next for them. We hope you enjoy these stories and perhaps are inspired to reconnect with your own loves!

During the Institute, Peyton stayed after a session to ask a question, but handed Gretchen his backpack and asked her to save him a spot next to her for lunch. Gretchen said, “That is when I first had an idea that he might be interested in me in the same way I was interested in him. This gave me the courage to pursue further conversation more towards a relationship rather than just as friends.”

Gretchen and Peyton often find themselves thinking back on their Institute experience and all they learned about themselves. They spent so much time talking to each other about their core values and what is important to them.

While they’re both still students at the University of Wisconsin-La Crosse, they’re also continuing to work on the visions they created at the Institute. In the meantime, they’re debating names for their future pet kitten, and are season ticket holders for Forward Madison FC, a semi-pro soccer club. 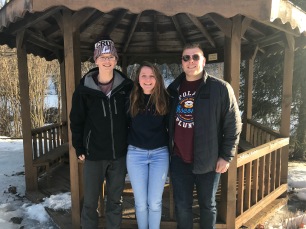 Peyton, Gretchen, and friend Markus at their Institute session.

Gretchen and Peyton at a Forward Madison FC soccer game